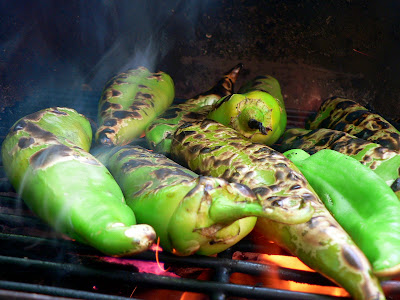 It's Hatch Chili Pepper season and usually here in DC we get screwed on the deal: in the past we've smuggled them out of Texas by checking a case of them in as luggage...much to the strange stares of everyone.

But this year I FOUND some at Whole Foods and quickly swiped most of them up, screwing anyone else that might want some. So you may be asking, "Lou, what's so special about these Hatch Chilies?"

Well, it's a terroir thing: they only come from Hatch, New Mexico and there's something in the heat, soil, handling of Anaheim peppers there that turn them into Hatch Chilies. They're hot yet buttery smooth and form the foundation of all good things needing chili peppers. From enchiladas to scrambled eggs these things add that extra something special.

But before they can be eaten they must be roasted, and that's why we're here today. 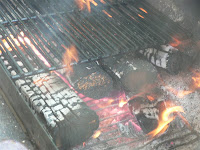 Roasting Hatch Chilies, or any pepper for that matter, is pretty simple. You can do this in an oven, over a gas stove, or the real tasty way by over a raging fire. The fire is preferred because what you want to do is get the peppers to sear and blister; the skin of the pepper isn't too pleasant on the palate. Also, roasting them bring out their great flavors.

Wash the peppers first and get a kitchen towel that's soaked and squeezed damp in water. You'll need one towel per 10 peppers. Set up a little workstation as such: 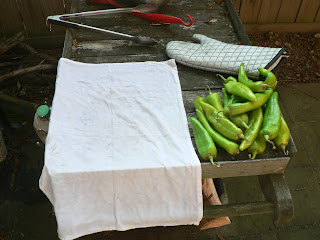 With the fire now raging in the grill, put your peppers on. They'll start to pop and smoke up a bit almost immediately. You want to char these little bastards pretty good but not cook them through. All you're really trying to do is get the skins off. 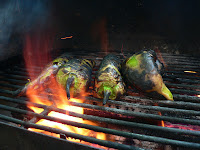 They're going to blacken pretty good but there will be some peppers - notably the curved ones - that just won't fully blacken in some parts. Don't force the matter because you'll wind up cooking it through instead.

When nicely toasted, place the peppers in the center of the damp towel and fold the towel over them in thirds. 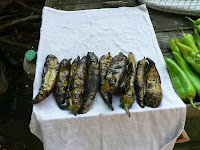 Soon you'll see steam coming off the towel and the smell of fresh roasted peppers will fill the air...even if you're outside. Allow the peppers to cool to room temperature underneath the towel. Start your next batch if you've got 'em. 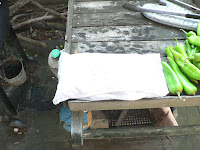 When done, you can use the peppers immediately or store for later use. Prior to using the peppers you'll need to remove the skins, which should come just right off. If storing, put anywhere from 2 - 6 peppers in a Ziplock bag (skins on), remove as much air as possible, and freeze until you're ready.
Posted by Lou at 9:24 AM

Most of these recipes are originals or based on another that I’ve found. If so I give credit to its source.
Measurements are approximate! When cooking I just eyeball what I’m doing so there’s no need to be fixated about what’s happening here. You can be off by 25% and still be OK unless stated otherwise.
All temperatures are in Farehnheit. Farenheight? Whatever. Degrees what us US folks use.
Typically these recipes will serve four persons and can be done in an hour or less.
I tend to make things hot and spicy so assume that if I’ve got it in there, it’s going to be felt/tasted. If you’re sensitive to this cut back on the heat. Same goes for garlic.
ALWAYS use fresh ground pepper. If not, go out and buy a pepper mill and then you can call yourself a cook.
ALWAYS use fresh parsley and basil. Grow it in the summer - it's easier than growing weeds. Don’t even bother with dried. If you've got dried in your house don't even feed it to the dog. This should be criminal.

I tend to UNDER salt dishes so adjust as desired after cooking. I also use kosher salt; if using table salt cut amounts I call for by ~25%. [Size matters. Ha ha? Get it? Kosher salt is bigger?]
Speaking of salt, use unsalted butter...always.
Have a glass of your favorite [alcoholic] beverage while cooking. It makes it much more fun and relaxing. You'd be amazed at your creativity, or creative destruction, in a mildly buzzed state.

Lou
Nantes, Pays de Loire, France
Hi all. I love to eat so I had to learn how to cook. I've been living in Nantes (France) for about a year and originally from Washington, DC. Not once have I worked in a kitchen, except in college. By training I'm a molecular virologist who later went to business school and now spend my days in the biotech biz doing biz development. Weird, eh?